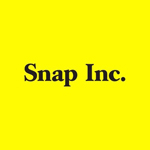 Snap owns and operates the Snapchat smartphone app, which lets social media users take photos and videos, attach messages, and send them to other users. The twist: The messages disappear in a few seconds, so there is a lot less pressure to look pretty or perfect when creating and sending images on Snapchat. The company's products include camera, chat, discover, snap map, memories, and spectacles. Snap serves two constituencies: its users, who average of about 220 million a day, and the advertisers who pay Snap to reach those users. Almost all of Snap's revenue comes from advertisers. The company has offices in the US, Europe, Asia, and Australia. Founded in 2010, the company's largest market is the North America which accounts for more than 60% of total sales.

The company operates in a single segment and primarily generate its revenue through advertising.

The Campaign Management Delivery helps advertisers increase their return on investment by providing more refined targeting, the ability to test and learn with different creatives or campaign attributes in real time, and the dynamics of self-serve pricing.

The camera offers a wide variety of creative tools, created by both the company and its community, to make it easy for people to personalize and add context to Snaps. The chat made it easy to send Snaps back and forth with friends. Discover helps surface the most interesting Stories and Shows from publishers, creators, and the community, based on a user's subscriptions and interests. Snap Map brings the users to a live map of location, showing nearby friends, popular stories, and a heatmap of recent Snaps posted to "Our Story". Users can choose to save the Snaps they create in a searchable personal collection called Memories. Spectacles connect seamlessly with Snapchat and capture video from a human perspective.

The company and certain partners that provide content on snapchat sell advertising directly to advertisers. The company's advertising customers vary from small businesses to well-known brands. No individual customer accounts for more than 10% of the company's annual revenue.

The five-year revenue performance of Snap has been dramatic, and only in that span that the revenue grew by a whopping 2,824%. However, the company haven't experienced a profit for the same period.

In 2019, the company's revenue increased 45% to reach $1.7 billion. Revenue increased due to growth in advertising demand, which resulted in an increase in the number of impressions.

Snap's net loss was $1 billion in 2019, a decrease of 18% compared to 2018. The decrease in net loss was primarily a result of a gain of $39.9 million on the divestiture of Placed, as well as decreased facilities costs, as the prior period included lease exit charges of $33.0 million.

The company strategy is to invest in product innovation and take risks to improve its camera platform. Snap do this in an effort to drive user engagement, which it can then monetize through advertising. It uses the revenue it generates to fund future product innovation to grow its business. The company believes that the best way to compete in a world of widely distributed mobile applications is innovating to create the most engaging products. New mobile software is available to everyone immediately, and usually for free. While not all of its investments will pay off in the long run, it is willing to take risks in an attempt to create the best and most differentiated products on the market.

Visual communication and augmented reality require intensive processing and generate high bandwidth consumption by its users. As a result, its existing users tend to come from developed countries with high-end mobile devices and high-speed cellular internet. These markets also tend to have cheaper bandwidth costs, meaning that it is less expensive to serve its community in these countries. As it continues to grow in more markets around the world, it is investing heavily in making its service and technology more performant on lower end devices and working with carriers and other infrastructure partners to provide its service at a lower cost to its community.

Snap were formed as Future Freshman, LLC, a California limited liability company, in 2010 and changed its name to Toyopa Group, LLC in 2011. Incorporated as Snapchat, Inc., a Delaware corporation, in 2012, and changed its name to Snap Inc. in 2016. The company completed its initial public offering in 2017 and its Class A common stock is listed on the New York Stock Exchange, or NYSE, under the symbol "SNAP."